Reflection on the Pilgrimage of Grace: Pieter & Lynette Bezuidenhout

“Reconciliation helps us to move from being prisoners of the past to people who have hope, vision and plans,” says Chaplain Pieter Bezuidenhout as he reflects on his participation in the Genadendal Pilgrimage of Grace, a three-day journey towards repentance, reconciliation, restoration and prayer in the Genadendal community, the Moravian Church and South Africa as a whole.

The Pilgrimage was a life-changing experience for Pieter and his wife, Lynette. “We still treasure the holy and precious moments. It was deeply personal and emotional to be part of the Pilgrimage, but also liberating especially after the intense Soweto initiative I was involved with in 2016 and my further research.”

At the very start of the Pilgrimage, meeting the pilgrims at the Moravian church in District Six, Pieter realised that this was God-given. “People from so many diverse backgrounds and places gathered with one vision: To seek God with a burning desire for healing and reconciliation of the pain and injustices of the past. We forged very special friendships and relationships over the three days.”

A highlight for Pieter and Lynette was the Saturday service at Genadendal. “To confess on behalf of a people and church, carrying the burden, like Nelis Janse van Rensburg (of the Dutch Reformed Church) himself said, must have been very difficult. The result, however, was breaking a yoke dating decades back. It was a relief, catharsis, victory, release and healing.”

Another highlight was the gathering at Cape Agulhas on the third day, which included confessions, repentance and praying for the continent. The prayer from the Phil Anderson of the UK was especially touching and emotional. He understood the absolute atrocities committed by his people through colonialism, slavery and imperialism. I believe it was a huge catharsis for himself and others, as he said that he had found his new identity in Christ, with fellow believers no matter their origins.”

On a personal level, Pieter found the time of reflection, singing and prayer at In Harmonie and Volmoed very enriching.

“What happened during the Pilgrimage has the potential to bring deep change and revival. Why? In deep humbleness and brokenness realising our own utter lostness and sinfulness before God and each other render the opportunity for God to fill us with His Spirit, clean and redeem us. Emptying us from ourselves, and our prideful self-righteousness, makes it possible for God to take His place in our lives. Before that, our own arguments, rationalisations, blame shifting, arrogance, pride and self-righteousness are on the throne. When confessed and sacrificed it opens the heart and mind for the Triune God to reign and rule in our lives, families, societies and country.”

The pilgrims who participated have been irrevocably changed, touched and transformed, and Pieter believes that their testimony about what happened during the Pilgrimage will spread a message of hope, strengthen faith and give honour to God. The 54 Days of Prayer for Africa that was initiated on the third day also helped keep the memory alive of what transpired during the Pilgrimage and spread the message further.

“There is no alternative to Biblical Reconciliation. It is a Biblical imperative. Reconciliation helps us to move from being prisoners of the past to people who have hope, vision and plans. Else hatred, revenge, blame shifting, hopelessness, injustices will burden us forever.”

For Pieter and Lynette the Pilgrimage was a step of faith, obedience and trust in the Word – and the result so great for those involved and possibly generations to come. “We experienced freedom, relief, joy, peace and gratefulness to be part of such a profound journey.”

"My journey to Obedience" 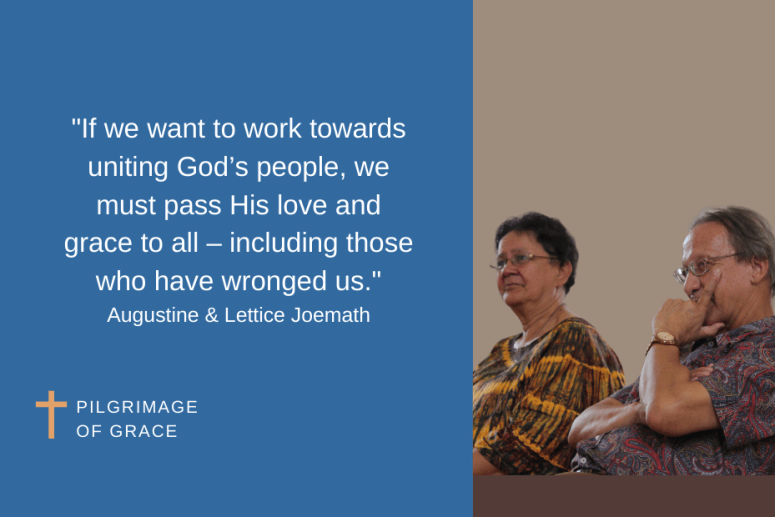