“Lay down your life” 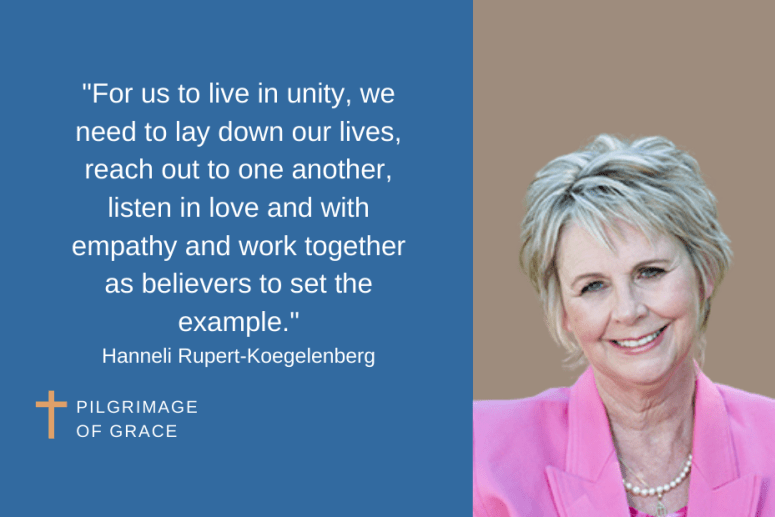 “No one lives in isolation; we need each other. For us to live in unity, we need to lay down our lives, reach out to one another, listen in love and with empathy and work together as believers to set the example,” says Hanneli Rupert-Koegelenberg as she reflects on her participation in the Genadendal Pilgrimage of Grace, a three-day journey towards repentance, reconciliation, restoration and prayer in the Genadendal community, the Moravian Church and South Africa as a whole.

The seeds were sown

The seed for the Pilgrimage of Grace was sown a few years ago when Hanneli and Anneke Rabe were moved by a book by UK writer Phil Anderson, Lord of the Ring. “This book really made us realise that repentance and reconciliation were needed between the Dutch Reformed Church and the Moravian Church. Many years later it was also very special to have Phil be a part of the Pilgrimage,” Hanneli says.

The groundwork for the Pilgrimage was laid over various years, but one of Hanneli’s highlights was a visit to Genadendal in February this year. “The love and warmth of the Moravian church was overwhelming. We were accepted as brothers and sisters in Christ, while we had the privilege to explore the town and museum.”

In June 2022 a group met at the Groote Kerk in Cape Town, where Rev Martin Abrahams of the Moravian Church delivered a message. “It was based on Herod who sent the wise men to find out more about Jesus’ birth, but that the Lord cautioned them to return home by another way. Rev Martin urged us as a church to go another way, be on a new path, towards reconciliation. These words were so timely, especially in the Groote Kerk where the Dutch Reformed Church has its roots.”

Then the weekend of the Pilgrimage of Grace arrived, from 23 to 25 September 2022. The first stop was at Moravian Hill in District 6, where the Group Areas Act led to many people being evicted from the area. “I could really feel the hurt and pain of the Moravian community, yet they were warm and welcoming and willing to open themselves up for us to ask for forgiveness and for relationships to be forged. This could only be made possible through Christ.”

Thereafter in the Groote Kerk, Hanneli was touched by a repentance from Anneke for apartheid, as well as Khumo Ntlha’s reaction of forgiveness (whom herself were convicted by the Lord that she should forgive her enemies). “It was amazing to see this friendship being forged – and then seeing Khumo’s husband Rev Moss Ntlha of the Evangelical Alliance of South Africa (TEASA) stand up on the pulpit of the Groote Kerk to deliver a message!”

Hanneli’s ultimate highlight was on the second day in Genadendal when Rev Nelis Janse van Rensburg of the Dutch Reformed Church repented on behalf of the church and Rev Martin Abrahams stood next to him, both crying. “At that moment I realised the extent, depth and necessity of the reconciliation that was taking place – and even more significant, that our prayers over the past more than two decades have been answered.”

The Holy Spirit’s presence was also tangible during the Genadendal service when a dove flew around in the church and started cooing during Nelis’ prayer for repentance as if to say, “Amen! Amen!”, before resting on the pulpit.

Symbolic of the unity of the two churches, the church leaders of the Moravian and Dutch Reformed Churches lit a candle each at Moravian Hill and the Groote Kerk and brought these candles to Genadendal where they lit a third candle together at the Genadendal Moravian church. “We then walked out of the church service with tea light candles which is symbolic of us going out to be a light to the world, spreading the message further.”

On the last day, at the southernmost tip of Africa at Cape Agulhas, various pilgrims from across South Africa, Europe, the United States and other countries repented on behalf of their nations for injustices towards Africa and its people. “We then strew salt across the Map of Africa as a symbol of cleansing and healing. We also need to be salt of the earth.”

“Through the Pilgrimage, I now know that anything is possible with God. And it doesn’t matter whether you’re part of the church leadership or a housewife – each of us can and should do our part to make reconciliation a reality. You just need to make yourself available to God and He will do the rest.”

Hanneli went through her own personal journey of repentance and forgiveness before she went on the Pilgrimage. “I couldn’t stand before the Lord during the Pilgrimage with unresolved issues. I had to be clean before Him.”

The power of reconciliation

“No one lives in isolation. As believers we’re all part of the body of Christ and need to live in unity with Him and others to glorify Him and to be a witness to the world. For us to live in unity, we need to lay down our lives, reach out to one another, listen in love and with empathy and work together as believers to set the example.”

Hanneli believes that the Pilgrimage of Grace will have a lasting effect on the individuals and communities involved. “It was not a rushed process and came from years of forging new and strengthening existing friendships. The topic of reconciliation is top of mind for the pilgrims who attended it and they have really committed to being ambassadors for reconciliation in their communities.”

“The question now remains: What steps can you take today to bring about unity and reconciliation around you?” The journey still continues and Hanneli looks forward to seeing what God is planning next. 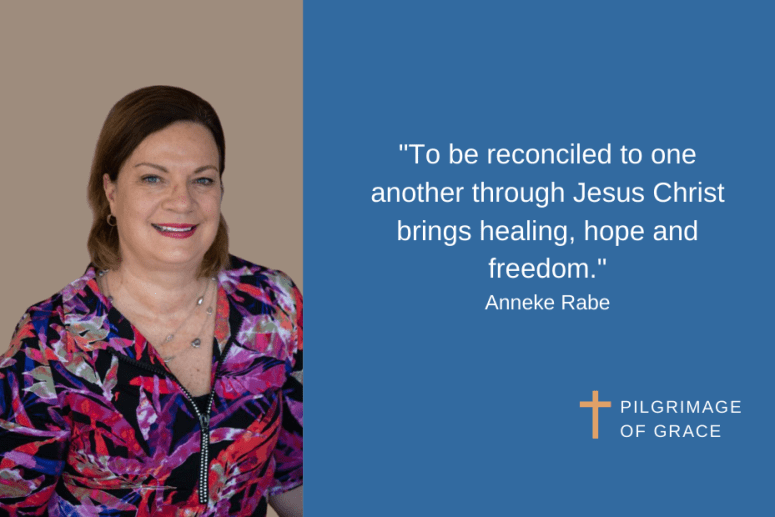